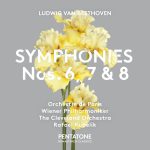 PENTATONE’s third release from Rafael Kubelik’s acclaimed Beethoven cycle of symphonies in its Remastered Classics series is his commanding reading of the sixth, seventh and eighth symphonies performed by the Orchestre de Paris, the Vienna Philharmonic Orchestra, and the Cleveland Orchestra.

Radiant, energetic and pulsating with driving rhythms, the seventh symphony is one of Beethoven’s most exuberant works, realised with panache here with the Vienna Philharmonic Orchestra. “Full, rich string and brass sonorities and excellent rhythmic clarity … this is a very high-minded interpretation  … the precision is still razor sharp and the playing is vibrant and colourful”. (ClassicsToday.com).

Sometimes known as the “hymn to humour”, the genial eighth symphony sits as an intriguing gem between the imposing seventh and stupendous ninth symphonies. In a performance described as “light-footed and bristling with energy” (AllMusic),  Kubelik captures the work’s essentially irreverent spirit with vibrant and colourful playing from the Cleveland Orchestra.

Rafael Kubelik recorded his cycle of Beethoven symphonies in the 1970s for Deutsche Grammophon, each with a different orchestra, earning widespread praise. Although recorded in multi-channel sound, these unmissable performances have previously been available only in the conventional two-channel stereo format. Using state of the art technology which avoids the need for re-mixing, PENTATONE’s engineers have remastered the original studio tapes to bring the performances to life as originally intended: in compelling and pristine multi-channel sound. 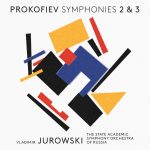 The acclaimed Russian-born maestro Vladimir Jurowski kicks off his new cycle of the complete symphonies of Prokofiev for PENTATONE with a searing account of the challenging and uncompromising second and third symphonies.

“There is something profoundly, even unmistakably Russian in these works”,  writes Jurowski. “I am deeply convinced that only a Russian orchestra can add something special to this music … That is why I am delighted to record Prokofiev’s symphonic oeuvre with the State Academic Symphony Orchestra of Russia “Evgeny Svetlanov”(GASO) for PENTATONE. Especially to Western ears, this could open up a whole new sound-world.”

Forged out of “iron and steel”, the rarely-performed Symphony No. 2 uses strident fanfares, martial rhythms and clashing dissonances to create great walls of sound to represent the inexorable march of the machine age. It’s a deliberately modernist work, written while the composer was in Paris in the 1920s and intent on provoking audiences.

The stark first movement is balanced by the second movement which is in the form of six disparate variations. Containing more subdued and lyrical moments, these variations build towards a relentless march, culminating in a series of hammer blows from the orchestra to end the work with a ghostly calm.

Jurowski writes: “It is incredibly challenging, requiring extreme physical effort from the musicians. Above all, the conductor has to answer a question: how do I structure such a strange, futuristic work?”

The Symphony No. 3 recycles material from his opera The Fiery Angel to great dramatic and terrifying effect. It’s an angry, defiant and complex work which contains a lyrical slow movement, a dazzling third movement in the form of a devilish scherzo and an almost unhinged final movement which starts as a sinister march and builds to an apocalyptic climax of alarming power.

Vladimir Jurowski has recorded extensively for PENTATONE and has received enthusiastic critical acclaim. In July 2017, he signed a long-term, multi-album agreement with PENTATONE which includes a new complete cycle of the symphonies of Sergei Prokofiev with his State Academic Symphony Orchestra of Russia “Evgeny Svetlanov”. Also scheduled for 2018 with the same forces is a recording of Tchaikovsky’s complete ballet Swan Lake.

Recent releases by Jurowski for PENTATONE include violin concertos by Britten and Hindemith with Arabella Steinbacher, and tone poems by Mahler and Strauss, performed with the Rundfunk-Sinfonieorchester Berlin where he is Chief Conductor and Artistic Director. 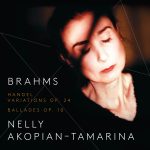 The incomparable, soul-searching playing of the veteran Russian pianist Nelly Akopian-Tamarina is captured in a rare studio recording for PENTATONE with a luminous performance of Brahms’s towering Variations and Fugue on a Theme of Handel, Op. 24 and the introspective Four Ballades, Op. 10.

In a distinguished tradition of playing stretching back to the great Russian school of Scriabin, Rachmaninov and Medtner through her teacher, the acclaimed virtuoso Alexander Goldenweiser, Nelly Akopian-Tamarina is an exemplar of an exquisitely crafted and poetical style of playing which is subtle, probing, deeply lyrical and utterly spellbinding.

Winner of the 1963 Robert Schumann International Competition for Pianists and Singers and recipient of the coveted Robert Schumann Prize in 1974, her career was nevertheless blocked by official censorship in the Soviet Union during the 1970s such that she made her London debut only in 1983 with a programme of Schumann and Brahms. Her public appearances are all too infrequent but sought after and cherished by aficionados; for an all Brahms recital in 2008 she was praised for her “luminous fortissimi, ice-edged chords, fine pianissimos, deliberated textures, intricate pedalling, and expansive, singing melodies” (Ateş Orga).

For this new release, Akopian-Tamarina approaches the programme with her customary sensitivity and poetic insights to give performances of rare subtlety and perfection.  “Classically framed romantic miniature fantasies, intricate, entwining studies in embroidery, decoration and voicing”, she writes of the Variations and Fugue on a Theme of Handel, “the twenty-five variations navigate the theme to a coronation of fugal triumph, immeasurable and immortal”. Elsewhere she compares the Four Ballades to the passing of the seasons “The First, Winter … icy and unforgiving … The Second, Spring, is an awakening … the first buds blushing into life.  The Third, Summer, as brief as youth … The Fourth, Autumn, is a symphonic poem, drawing to a close the dissonance of life’s pain, touching the untouchable.”

“The piano sound made by the Moscow-born Nelly Akopian-Tamarina was not only distinctive, but almost tangible … a playing tradition going back to the giants of the past, to Rachmaninov, Moiseiwitsch, Scriabin and what we imagine of Liszt … a fragile, poetic creation in every fold of her dress and with each flick of the wrist.” (The Sunday Times, December 2010).

This recording, her first for PENTATONE, was made in the warm acoustic of the Snape Maltings in England.