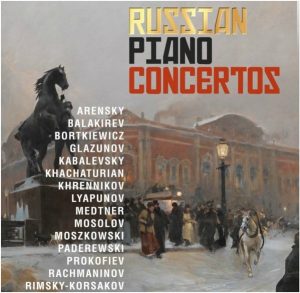 Lovers of full-bloodied Romantic piano concertos will find plenty to gorge themselves on in this irresistible survey of Russian concertos from Brilliant Classics, comprising 33 works by 20 composers in reissues of recordings made between 1964 – 2016.

Along with familiar staples of concert programmes are many once-popular but now rarely-performed concertos; frequently astonishing in their virtuosity, emotional range and orchestral brilliance, it’s a mystery that these are not heard more often. After listening to these compelling performances you will probably agree that a renaissance is long overdue.

A number of performances stand out. Shorena Tsintsabadze is terrific in the two soaring concertos by Lyapunov; Boris Giltberg dazzles in the two Shostakovich concertos (especially the witty finale of the First); Hsin-Ni Liu is exuberant in Kabalevsky’s breezy and memorable third concerto and Rimsky-Korsakov’s colourful work; and there’s a ravishing account by Stefan Doniga of Bortkiewicz’s rare second concerto, music which sounds straight out of the golden age of Hollywood.

Elsewhere, Oxana Yablonskaya is commanding and incisive in Khachaturian’s exotic and tuneful concerto (played without the flexitone in the slow movement) and the two under-rated Glazunov concertos. And in complete contrast there’s an electric performance from Steffen Schleiermacher of Mosolov’s brutally cacophonous but oddly accessible concerto, written in the fervid period before the strictures of Soviet formalism.

Along with serviceable readings of the famous concertos by Tchaikovsky, Rachmaninov and Prokofiev (Bernd Glemser is particularly convincing in Rachmaninov’s third concerto), it’s gratifying to have a number of Polish concertos included. In landmark recordings from the 1960s, the seductive concertos of Moszkowski, Paderewski and Scharwenka are hidden gems in the repertoire.

Altogether this a richly satisfying, wide-ranging and thrilling collection, warmly recommended for aficionados and newcomers alike. 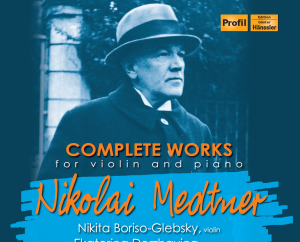 Thrilling advocacy for Medtner’s music is given by Nikita Boriso-Glebsky and Ekaterina Derzhavina in close-knit and indefatigable performances of these unjustly neglected works for violin and piano. From the instantly appealing Sonata No 1 – with its Russian folkloric elements and rhythmic ambiguities – to the expansive and jaw-dropping Sonatas Nos 2 & 3, both grand in sweep and ambition, the playing is lyrical, persuasive and unflagging with a beautifully sonorous piano texture and a crystalline clarity in the weaving violin line. The sound is well-balanced too, accommodating the intricate polyphonic textures and the more rumbustious passages. The sonatas are joined by the 3 Nocturnes and the 2 Canzonas and Dances: short, poetic mood pieces exuding considerable charm.