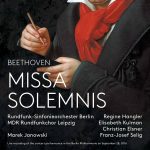 “From the heart to the heart” – Beethoven’s deeply felt and visionary choral masterpiece, the Missa Solemnis

The conductor Marek Janowski and the Rundfunk Sinfonieorchester Berlin continue their critically acclaimed collaboration with PENTATONE in a magnificent reading of Beethoven’s monumental Missa Solemnis, recorded live at the Berlin Philharmonie in September 2016 in partnership with Deutschlandradio Kultur.

Considered by many to be his finest work, with the Missa Solemnis Beethoven updated the choral traditions of Handel and Bach with his own ineffable style to create a startlingly original and dramatic large scale work. By turns intimate and deeply moving, it’s also one of his most forward-looking works. With consummate skill, Beethoven marshals the disparate elements of liturgical, secular and operatic expression in a wholly original and compelling way. From the jubilant Gloria with its ecstatic outbursts, to the radiant Benedictus with its soaring, ethereal solo violin, it’s a riveting experience. And Beethoven constantly surprises throughout, especially in the closing Agnus Dei where the serenity is shattered by a terrifying militaristic outburst, eventually subsiding for a radiant conclusion.

Marek Janowski is no stranger to the PENTATONE catalogue; his recordings with the Rundfunk Sinfonieorchester Berlin of the ten mature operas of Wagner were universally praised for setting new musical standards. The BBC Music Magazine described the Tannhäuser release as “…the best recording since that made in Bayreuth in 1962”. Also recorded in the superb acoustics of Berliner Philharmonie, the Parsifal release was praised by the critic Michael Tanner who wrote that the sound was “…so realistic as to be almost alarming.”

The Carnival of Venice in 1729 was quite unlike any other. Over a period of two months, opera houses went into a frenzy of competition to show off the most famous singers of the day, including the legendary castrato Farinelli who made his astonishing Venetian debut. Several of the most fashionable composers rose to the occasion, writing ravishing music for spectacular productions which often pitted the singers against each other in breathtaking displays of virtuosity. The results were sensational; one tour de force followed another in an atmosphere of fevered excitement and the adoring public lapped it up.

“The excellent musicians of the fantastic period-instrument ensemble … get it all perfectly right: every tone, every phrase, coloratura and accompaniment”  (Süddeutsche Zeitung).

The critically acclaimed Il pomo d’oro is an Italian baroque ensemble founded in 2012 with a special focus on opera with authentic performances on period instruments. They have recorded 15 albums including the world premiere recording of Leonardo Leo’s Cantone in Utica

With a repertoire that includes leading roles in operas by Rossini, Mozart, Gluck, Handel, Vivaldi, Monteverdi, Purcell, Bizet and Massenet, Ann Hallenberg is a much in demand Swedish mezzo-soprano and has recorded over 40 CDs, her solo CD Agrippina winning the award for best operatic recital at the International Opera Awards in May 2016.

The baroque violinist and conductor Stefano Montanari is a much sought after guest conductor with both modern and period orchestras. He is regarded as one of the finest baroque violin virtuosos of his generation. His recording of Corelli’s Violin Sonatas op.5 won a Diapason d’Or and he was nominated for a Grammy Award for his recording o Purcells’ O Solitude with Andreas Scholl for Decca.

Bruckner’s massive orchestral landscapes often feel like unstoppable forces of nature: radiant, magnificent and thrilling, with a soul-searching beauty and power. Feelings of reverence and awe are accentuated by organ-like sonorities which are given new dimensions with blazes of orchestral colour and disconcerting titanic shifts. Little wonder that his first symphony so bemused audiences at its premiere. Also included in this release are his Four Orchestral Pieces from 1862. These intriguing but sometimes overlooked works give a fascinating insight into Bruckner’s developing compositional style.

‘‘Yesterday, a true conductor was born in the Concertgebouw”, wrote the Dutch newspaper Het Parool of Gustavo Gimino’s conducting début with the Royal Concertgebouw Orchestra in 2014. His career has since taken off to widespread acclaim. In a busy schedule, he has since debuted with major orchestras in Europe and America, and toured with the Royal Concertgebouw Orchestra to Taiwan and Japan. “Gimeno cultivates … a bright, transparent orchestral sound free of dull pathos and also rediscovers colours in this score,” wrote the Trierischer Volksfreund in 2014. “[…] Wonderful! This conductor is a discovery!”

Starting with the 2015/2016 season, Gimenez took up the post of Music Director of the Orchestre Philharmonique du Luxembourg, focussing on the first symphonies of Bruckner, Mahler, Beethoven, Schumann and Shostakovich. Together with the orchestra, he started an auspicious collaboration with PENTATONE in 2016, with three releases planned in 2017.