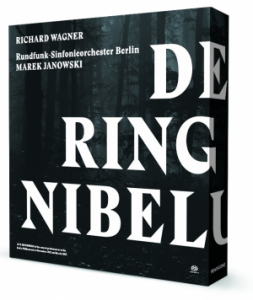 I had the honour of writing booklet notes for this very first complete cycle in multichannel surround sound.

A release that leads towards Marek Janowski conducting The Ring at the Bayreuth Festival 2016.

The 1st of May is the official release day, but you can already buy it on the Pentatone website. Order now and get a 16% discount until the release date. You have 16 days to enjoy this advantageous offer.  Promotional code WAGNERRING

About the performance
“Janowski’s dramatic instincts and his ability to obtain orchestral playing of great intensity and presence are as keenly honed as ever – there are some thrilling interludes in this Rheingold.” THE GUARDIAN

The Rundfunk-Sinfonieorchester Berlin together with conductor Marek Janowski, one of the great masters and exponents of the music of the German tradition, recorded the four operas Das Rheingold, Die Walküre, Siegfried and Götterdämmerung at the Berlin Philharmonie in 2012 and 2013. All recordings were made during a unique series of live concertante performances, which allows for an orchestral clarity that is impossible to achieve when the orchestra is placed in a pit.

In the below interview, Marek Janowski talks about the way he envisioned this spectacular version of The Ring: